Pain Drove Him Away.

Tragedy Brought Him Back.

Will Fate Bind Them Together?

An abusive childhood and an accident in his teens left stallion-shifter, Malcolm Patterson, with a distrust for his father and a lot of holes in his memory. When his dad passes away, Malcolm returns to Horse Mountain to fulfill his obligation to settle his old man’s affairs but finds the shifter community’s near hero-worship of the late doctor disquieting. He’s further shaken to meet a curvy beauty at the funeral who makes his heart gallop and his primal instincts take over.

Suki Marks has been in love with handsome and noble Malcolm Patterson ever since he saved her from bullies who called her an abomination when she was ten. He was the first person to be straight with her about the reasons some people shunned her family and he was quick to debunk those prejudices as the ignorant folktales and stupid superstitions they were. Even after Malcolm graduated high school and left town, she couldn’t forget him, but becoming Doctor Patterson’s live-in nurse in his last year of life was a coincidence. She never expected to be named in the wealthy physician’s will.

Malcolm assumed he’d be disinherited, but even from the after-life, his father continues to turn the knife, using his will to set up an elaborate scheme to taint Malcolm’s feelings for the woman who might be his fated mate. To make matters worse, a dangerous shifter-purist movement is brewing among a small segment of the Horse Mountain Clan, and they’re determined to prevent Suki from passing on her genes to a new generation. Will Malcolm be able to work through his past in time to secure his and Suki’s future?

Warning: Saving Suki is a smoking hot romance with graphic, put-you-in-the-moment love scenes. If you’re offended by sexual language, you might want to consider another book. The book can stand alone without reading the others in the series, but reading Horse Mountain Shifters 1-3, will add to the enjoyment of the experience. 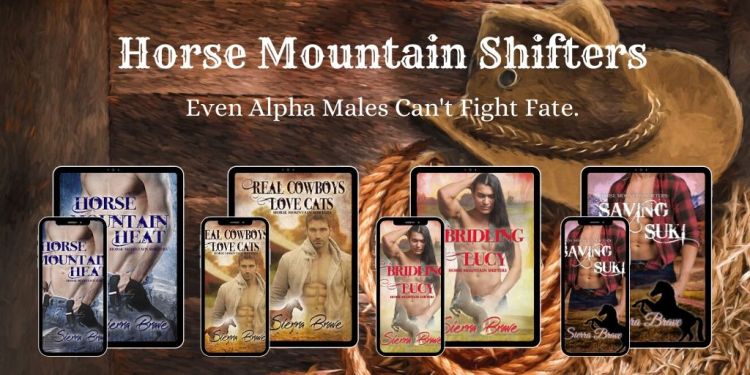 Other Books in the Horse Mountain Shifters Series:

A sorrowful expression crossed her face and he knew he’d already said too much about his unusual upbringing. As he contemplated a way to lighten the mood again, she found the answer without saying a word, reaching up to her shoulder and placing her hand over his. A squeezing sensation in his chest complimented the haze rolling over his rationality. So many mixed emotions vexed him since his return, especially the anger and regret he’d tried his best to lock away. Her tiny gesture and light touch sent all the pain scurrying. Warmth bloomed over his knuckles and radiated up his arm, gaining intensity and burning the hottest across his torso.

“You’re putting on a brave face, but how are you really holding up?”

Her words pricked at his brain as he breathed in her sumptuous fragrance. “Umm…honestly, if I try to think about my father being gone forever, I feel a bit numb.” As his own words hung in the air, an odd, sour sensation stirred in his stomach. Why the hell did I tell her that? He hated thinking about his dad. Imagining how things could have been if they’d reconciled seemed useless since he’d never admitted he’d always wanted the old buzzard’s love. He sure as hell didn’t want to talk about his contradictory emotions on the subject, but even still he could hear his stupid mouth dropping more of his secrets like a huge drain sending washed-away filth out of the shower. “Things were never good between us and during the entire funeral, I felt like a fraud.”

“The parent-child relationship is often a complicated one.” She rested her head on his shoulder while tucking herself in closer to his side, another comforting gesture that somehow had him ready to spill his guts to this woman he barely knew.

“No kidding. I know I’m supposed to be devastated…I can’t seem to muster up much feeling on his passing at all.” Why, why, why! Why can’t I keep my big trap shut around her? She’s going to think I’m a fucking sociopath.

“Perhaps you will when the shock wears off a little.”

“Maybe, but I doubt it. I know it sounds bad, but my dad wasn’t the man that all those people today thought he was. If they knew half of what he was really like…Shit, I must sound like a huge asshole. I’m sorry. I don’t even know why I’m telling you this stuff.”

She patted his knee. “Because you need to talk to someone and I’m here.”

Wrong! Wrong! If I wanted to dredge up all this bullshit until I choke on it, I’d be talking to Dash and Mama Carol; they know the real deal.

Part of him wanted to call it a night if only to end the uncomfortable conversation, but his body wouldn’t cooperate. His heart raced as he swallowed the lump in his throat. Normally, the horse inside him would have been ready to bolt, but at this moment, the damn thing was more like a mule, digging its hooves in and refusing to budge.

“It’s not like I’m happy he’s gone. It’s more like I can’t force myself to feel sad about it.”

Sign-up for Sierra’s newsletter. Never miss a new release, sale or freebie, and she’ll send you a copy of Fevered Dream for FREE! Click here to claim your free book.

The Life & Ramblings Of A Zillennial