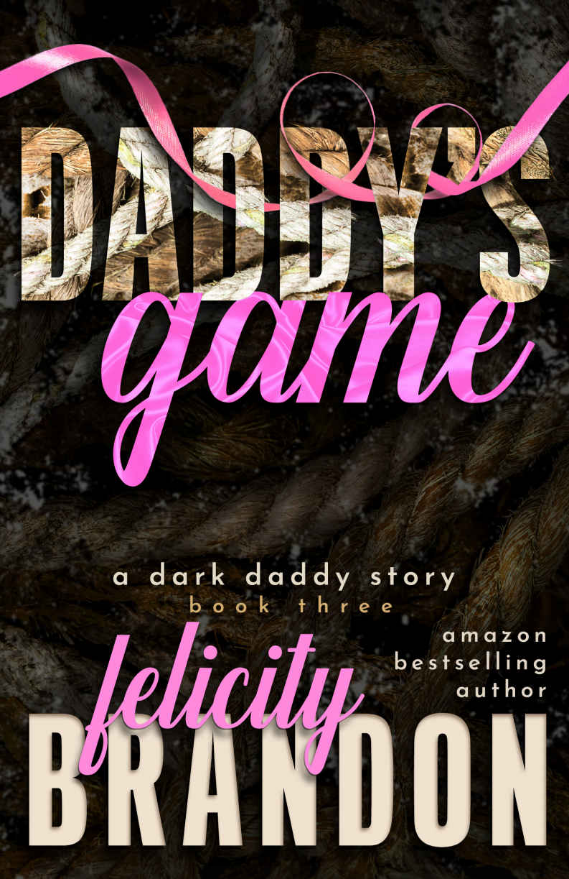 With no hope of breaking free.

He’s a drug. The more I try to leave, the closer he pulls me.

Wherever I go… Daddy will haunt me.

Daddy’s Game is the third in the dark and suspenseful series from Amazon bestselling author, Felicity Brandon. Dark adult content is included–you have been warned…

A tidbit to whet the appetite:

He inhaled, wrestling the first pink ribbon into a bow in her hair. “What’s that supposed to mean?”

“It means I never know what to do to make you happy.” She sounded exasperated, tugging her head away from his hands, which were still attempting to arrange the ribbon. “Once moment you want to talk to me, the next you want me silent. One minute you’re angry, the next you’re…” She hesitated, her brow knitting.

He had to physically suppress the anger which pulsed through his body at her reply. The nerve of the woman—criticizing him when she was the one causing all of the issues. Couldn’t she see by now what he was trying to achieve? A routine that would finally bring them both pleasure—a new life for both of them.

In her reflection, Jared saw emotion flare in her eyes, though he couldn’t say if it was fear, fury, or frustration.

“Tender?” she spat the word out. “Sometimes, it seems as though you love me, and other times like you can’t stand the sight of me!”

Jared paused at that. It was a response he hadn’t been anticipating.

“That’s how it is, baby,” he concurred, pulling at the other side of her hair roughly as he bundled it together for the remaining ribbon. “That’s how you make Daddy feel.”

“So, it’s my fault?” Her eyes widened with disgust. He stared at her for a long moment in the mirror, his fingers pausing the infuriating task at her hair. “I make you feel this way?”

Jared blinked in disbelief. Why was he having this conversation? Why was he even entertaining it? Yet some part of him seemed to need the catharsis—to say what needed to be said, to get it all out there before he came down on her like a ton of bricks again.

“It’s always been you, Sophie.”

He forced the second piece of ribbon into place, discarding the hairbrush onto the bed before assessing his handiwork. Sophie was right about one thing—his hairdressing abilities were seriously lacking, and her hair hung in untidy, wonky pigtails on either side of her head.

“Everything I’ve done, I’ve done for you.”

Hadn’t he told her this before?

“The times you messaged me late at night when your useless fucking husband had left you all alone. I replied to you. I returned those messages. Didn’t I?”

“For you, Sophie.” Their gazes locked in the mirror. “I did that for you.”

Sophie’s brow furrowed, and she looked away until he snaked his hands around her body, his palms massaging her wonderful, exposed tits. Even after nearly two days, he wasn’t used to having her naked all the time. He doubted he’d ever be used to it.

“The plan I created to get to you, to get into your home. Hiring the van, getting my friends on board.” He waited until her eyes flitted back to his before he continued. “All for you, little girl.”

She nibbled her lower lip, her expression conveying the idea she didn’t quite agree with his argument, but that was irrelevant. It appeared Sophie would never agree and would just have to learn to concede instead.

“And this place.” Jared pressed his body against her nudity, his arms tightening around her. “Everything I did to make this an inviting place for you, Sophie. All of the modifications I made. The playpen, the chair in the kitchen, and your room, Sophie—I decorated the whole damn place for you, baby girl.” Emotion spiked in his voice at the memory of the effort.

“All. For. You.” He sighed into her hair. “I yield for no one, yet I turn my whole world upside down for you.”

Marketing With A Story