She was sent to them to protect and became a responsibility they couldn’t resist.

B.J. Wane has brought with her Book 5 in her series Cowboy Doms.

If you haven’t picked up one of these books, now is the time with cold winter nights that need to be filled.

This is what this one is about:

After Kelsey Hammond was assaulted, her former FBI foster parent’s pleaded with 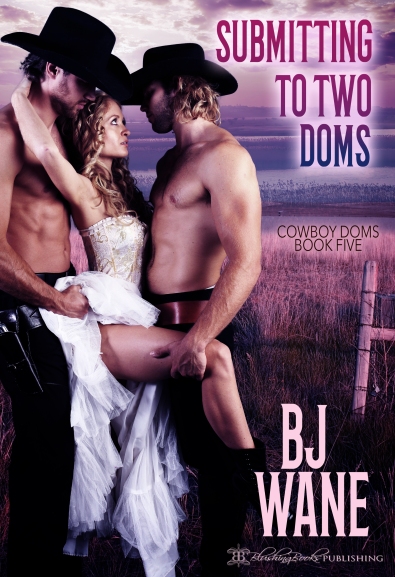 her to spend a few weeks with their friends in Montana while they investigated the incident. Since she would do anything for them, she grudgingly agreed, wondering how she would pass the time on a ranch in the middle of nowhere without going stir crazy. As soon as she caught sight of her two hosts, Greg Young and Devin Fisher, she decided what better way to take her mind off her troubles than with an affair with one of them.

Ex-FBI agents, Greg and Devin, vowed never to get personally involved with another woman under their protection after their last case ended in tragedy. When their former boss asked for their help, the two best friends butt heads over how to answer them. Between the insecurity reflected in Kelsey’s blue eyes, the desperation behind her flirtations and discovering her submissive side, both men found themselves succumbing to the petite blonde.

While Kelsey basked in the dominant attention of both her cowboys, she continued to insist she couldn’t wait to get back to her life in Philadelphia. It wasn’t until the threat against her was verified that the truth came out about her past and a few disturbing mishaps occurred that Greg and Devin had to consider one of their guests was there to harm the woman they’d both grown to care for. It took the guys saving her life, freeing her to return home for Kelsey to realize home really was where the heart was and hers was in Montana with her two cowboys.

Here is a sample to whet you appetite. (PG17)

He swore as she spun around and took two steps toward the open door, twitching that cute ass he was sure, on purpose. He understood she was put out by her circumstances and that the ranch offered little in the way of pastimes she was used to. But that was no reason to break his vow not to involve himself on a sexual or personal level. She tempted him, he wouldn’t lie, but not enough to go down that slippery road again with a woman he’d sworn to protect.

After ensuring they were alone in the stable, Greg decided an example of those consequences he mentioned wouldn’t threaten his resolve if he delivered just enough to deter Kelsey from her set course and spare her the embarrassment of Devin’s reaction. Reaching her in two, long-legged strides, he grasped her hand and tugged her back into the stable.

“You need to heed my warnings better, and remember, I don’t bluff.” Ignoring her startled gasp, he yanked her into the crook of his arm, pinned her against his side and delivered five rapid swats on her upturned, jean-clad butt, putting just enough force behind them she would experience a twinge of discomfort and nothing more.

“Hey! What? Holy shit!” Kelsey’s strident cry ended on a gasp, and much to Greg’s surprised annoyance, she lifted her ass for the last slap, as if embracing the humiliating experience instead of balking at it.

Helping her upright, he kept hold of her upper arms as he gauged her reaction. Fuck if the rose hue blooming on her face and dilation of those large eyes didn’t hold a hint of excitement. Not only he, but Devin would be hard pressed keeping their hands off her if they learned she possessed a submissive streak and she kept up with her cock-teasing innuendos.

Purchase at these retail eBook stores:

Here is a little about B.J.

I live in the Midwest with my husband and our dog, a lovable Great Pyrenees/Standard Poodle.  I love dogs, enjoy spending time with my daughter, babysitting dogs and kids, reading and working puzzles.  We have traveled extensively throughout the states, Canada and just once overseas, but I now prefer being a homebody.  I worked for a while writing articles for a local magazine but soon found my interest in writing for myself peaking.  My first book was strictly spanking erotica, but I slowly evolved to writing erotic spanking romance with a touch of suspense.  My favorite genre to read is suspense.